She was a beauty and remained so until her last days about two weeks ago when she passed away a few days after she celebrated her 99th Birthday ….…
Tante Dee’s father was Joost Willem Tambajong and her mother was Johanna Maria Wilson Mononutu.   Opa Joost and my grandfather Opa Jan Nicolaas Tambajong were brothers. Each of them had a very different lifeline. My grandfather being the eldest son had his destiny in the “Public service” which means he was in service of “ het Gouvernement van Nederlandsch-Indie” as “Majoor van Tombassian” stationed at Amurang.

Tante Dee’s father took a job at a German trading company in Manado and succeeded in creating a status that made his family lived well. Eventually he also bought a truck and my mother told me once  that Oma Marie (Tante Dee’s mother) was therefore skilled in driving a truck….. and that in the early 19th century in Manado.

Later when the family moved to Batavia they stayed in a respectable area: Oude Tamarindelaan (Now Jalan Wahid Hasyim) on a property bought by Tante Dee’s father. Because he was diligent and able at the end of each calendar year he obtained a bonus. These funds he invested in new property in his neighborhood ….. Eventually these properties were located at a place where now the Jalan Thamrin (one of the most important roads in Jakarta) is.

On the picture above my mother is at the rear. She apparently often frequented her aunts premises. At that time my mother was studying for her “hoofdacte” as a teacher and had her boarding at the “Vrouwenbond” (an intern for working women) located not very far from her aunts house.

Once when I was chatting with Tante Dee I told her that my father (at that time married to his first wife) when he was working as a teacher in Jogya had a “rijtuig” (a carriage pulled by a horse), she promptly added : “O ja…. Dat hadden wij ook!. (Oh yes we had one too…..) For me as a person of the 20th century, I could hardly imagine the implications of having such a carriage plus the horses plus the “driver” plus his family around the house. I understand now why at that time in Batavia the houses of the well to do had huge gardens ……. 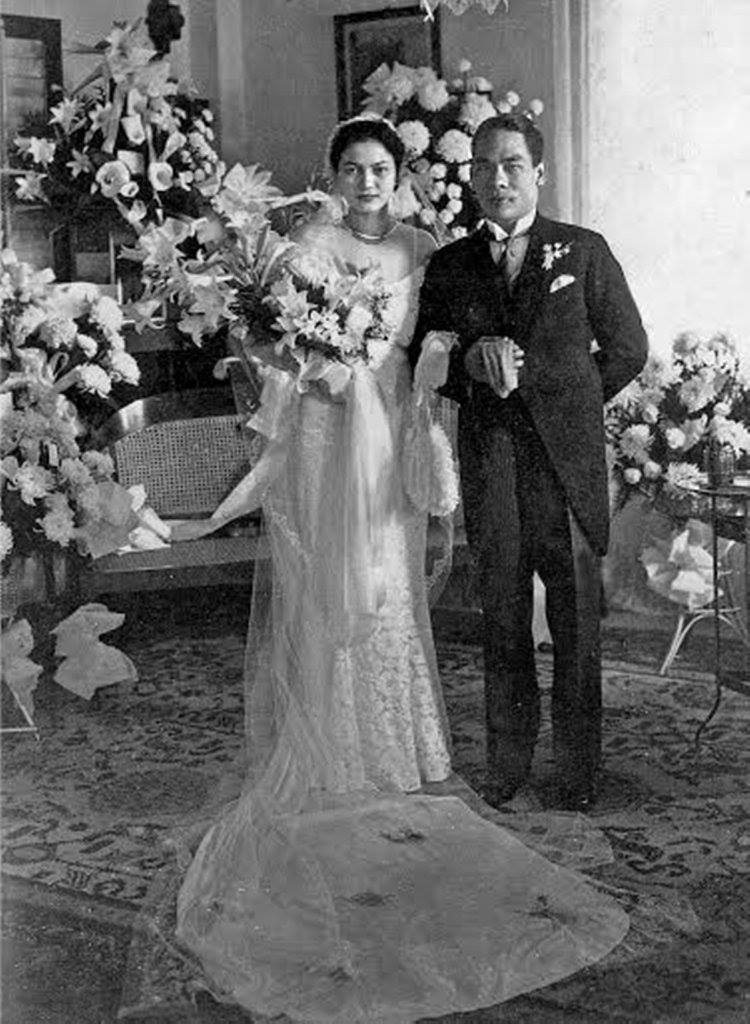 Note: Thank you Jeanine for sending us this beautiful picture of your Mom’s wedding.

Her husband had a well attended medical practice. They had six children four girls and two boys.

Unfortunately Oom Emiel died young for current standards…. He was 58 years old when he passed away. Therefore Tante Dee raised her children alone, with assistance of Oma Marie, her strong mother…… I think that financially she might have had no problems, at least not visibly.

Whilst she was living in Jakarta, four of her children emigrated to the US and live there well also.  Tante Dee traveled to and fro  from Indonesia to the US, like we might travel to and fro Jakarta – Bandung. It seems that she liked living in Indonesia because she had a group of friends all about 70 – 80 years of age  meeting regularly to have a chat with each other.

I have a lot of old pictures scattered around and I will add the gradually add them to this post when they eventually surface.

Two years ago I had the opportunity to be invited for the celebration of Tante Dee’s 97th birthday party. The occasion took place in a Restaurant named “Loempia” in central jakarta. I assume that it must be a Restaurant often frequented by her and her family in those “good old days” even before the war. I was lucky to be able to make a video.

Until a few years ago Tante Dee lived in a beautiful “Indiesch huis” at Sawangan in the southern part of Jakarta. One day my son Rano and I visited her there. To see the pictures that we made please click

A few days after her 99th birthday she passed away peacefully in Jakarta.

The latest and last pictues of Tante Dee :

On the so called “BLACK SUNDAY” or in Bahasa Manado “KUMAWUS”

I am a retired chemical consultant, now enjoying my "golden years", dedicating myself to all sorts of hobbies: reading, blogging, digging View more posts

3 thoughts on “OBITUARY to my AUNT “Tante Dee Tambajong””

This site uses Akismet to reduce spam. Learn how your comment data is processed.