Traveling has always been my enjoyment. When at previous times active as a professional, later as a senior couple…… It was always exciting. I have written various postings about my experiences…… However now it is different…. Being 85 years old it need some technical adaptations. But the spirit is still high.

Now I am waiting for the counter to open be able to deliver and receive my luggage tags of which I have two pieces. Silly girl. This should be a lesson for me the next time’

My fellow travellers from Manado to Jakarta includes (I guess) a group of Chinese schoolgirls. Also 6 young cadets i suppose going for a training course.

It did not took long or the girls asked for an opportunity to be able to make a picture with the young men. And I enjoyed to see that young people apparently are the same not depending on race or ethnicity. 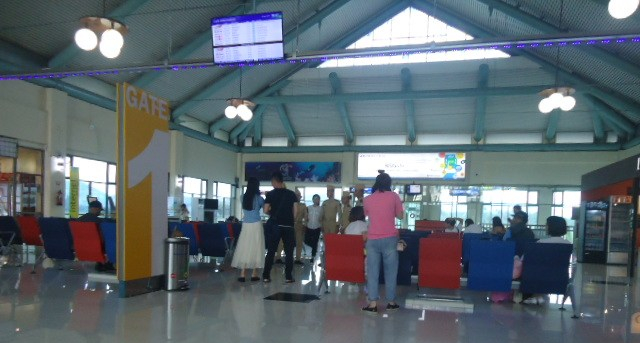 Chinese schoolgirls posing with a group of cadets.

After safe arrival at home in Jakarta and 2 days of rest I remember that I want to write about something that happened to me on this flight. Although I have traveled around a lot both to domestic as well as overseas destinations, but my experience during this flight was quite unique so that I thought that I have to add it to this posting.

Upon takeoff I had a look at the beautiful new movie by Disney – PIXAR about little Miguel and his guitar. I had my dinner, and my plate was taken away and I became fully absorbed in viewing the movie. Suddenly one of the many female flight attendants came rushing passed my aisle seat and smacked down, without any comments. 3 plastic packages on my still open table.

I inspected the packages and found out that each of them contained a bun that seemed stale because it showed a few light green and red coloration that is a sign of the buns being not too fresh.   I waited a while to see if the other passengers were also been given the same “bonus”, but that was not the case. I therefore called another (still rushing around) female attendant and gave her the three buns whilst asking her why I was given this non-requested present, also saying that I did not asked for it and also do not want it. I also said that the way in which the he buns were smacked down on my table was not polite and a sign of bad manners. I asked her to report this incident to her superiors, which she did.

Soon the purser came and I reported the happening. He offered his excuses but the expression on his face did not appear to be too sincere, rather having a bit of fun having to offer his apology, which shows me to be more of a defensive reaction than of truly being sorry of the happening. This observation I also made of the over polite request by the other flight attendant on their apologies, that was bordering to cynicism of having to put a formal excuse to what happened.

Anyway I said that it is indeed shameful for a passenger who, after all, has paid money for the flight, to be treated this way by a flight attendant.

Hopefully this little affair can get the attention way up to the people in charge with educating the flight attendants to teach them that the customers are STILL KING, and should be treated at least politely.

After a few years I see that the last part was gone sothout any explanation. OK anything might have happened and I will cbeck it out later

I am a retired chemical consultant, now enjoying my "golden years", dedicating myself to all sorts of hobbies: reading, blogging, digging View more posts

This site uses Akismet to reduce spam. Learn how your comment data is processed.